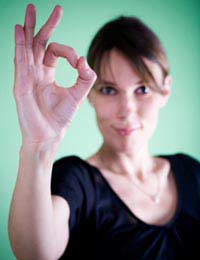 Hands on signing is also known as hand over hand signing, and refers to a type of sign language where the user's sense of touch as well as, or instead of, sight is used. There are other types of tactile signing, such as tracking, tactile fingerspelling, co-active signing, on-body signing, Lorm, tracing and Braille signing. The main reason such forms exist is to help people who are deafblind to communicate as they cannot use British Sign Language or any other kind of visual sign language. Some people who are deaf rather than deafblind may also choose to use hands on signing if they prefer but as fewer people are familiar with it, it usually makes sense for them to use visual sign language.

How Does It Differ?

The words which are signed are signed in the same way, but with hands placed upon the body, using the sense of touch to establish what is being spelt out. Usually, the hands are placed upon the back of the 'listener' as this provides the best canvas for the speaker to work from. This form of sign language is especially useful for people who have usher syndrome and have lost their hearing first followed by their sight. This is because they will already know what the signs look like, as the signs are only very slightly modified from the local visual sign language.

What About People Who Do Not Use Sign Language?

Other Points to Note

A key point to note for anyone who is thinking of trying to learn any form of tactile signing, is that as these forms are generally developed for deafblind people, care should be taken in what one is wearing. This is because many deafblind people do have some limited sight left and use colours and light to identify things. This means that people should try to wear clothes in block colours which contrast with the wearer's skin, so that the deafblind person can more readily make out the shapes on their back or other part of the body. Stripes, dots and other patterns should definitely be avoided.

You might also like...
Share Your Story, Join the Discussion or Seek Advice..
Hi I have a blind child and he has a moderate hearing loss. I wonder if you can help me to teach him sign language and I need to learn as well. Regards Basma
Basma - 30-Jul-19 @ 9:01 AM
@Puckle - there must be lots of free online videos offering this. It would be a very easy and cost-effective way to learn. Good luck.
MisttY - 10-Apr-18 @ 1:55 PM
I have wanted to learn to communicate with deafblind people for a long while after seeing a documentary about it. It moved me so much that a lot of these people are in isolation often complete darkness and silence. I have no knowledge of BSL but would really like to know where to start. My daughter is slightly hearing impaired in one ear and I often think of how this must affect her life. Any advice would be very helpful. Thanks.
Puckle - 10-Apr-18 @ 8:29 AM
Title:
(never shown)
Firstname:
(never shown)
Surname:
(never shown)
Email:
(never shown)
Nickname:
(shown)
Comment:
Validate: