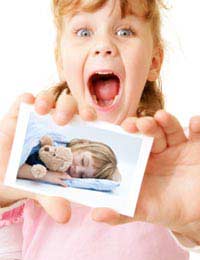 Picture exchange communication is a way of teaching people, especially young people, to communicate if they have disabilities which make it difficult for them to use language in the conventional way. This can include deaf people, but more traditionally, picture exchange communication has actually been used for people with autism who may struggle to communicate effectively using more traditional methods. As the name suggests, it is a method of communication which sees the user use pictures to get their message across - showing a picture of what they want to say. At its most basic level, this can be showing a picture of a bed if they are tired.

When a person has developed their picture skills enough to be able to say what they want and to respond to the basic questions requesting this information, it is time to move them onto comments and more spontaneous communication. Not everyone will be able to do this but by constructing sentences with the pictures, the speaker will be able to build up a solid base of sentences and learn about being more elaborate with their language. In time, and with patience from their teacher, they will have the desire to comment on issues which are happening around them instead of simply stating what it is they want.

Many people fear that if they teach someone to communicate using picture exchange, they will actually never be able to speak in a verbal manner as they will be so dependant on the picture system which they use. However, the opposite is actually true. The more a person is taught to communicate, the more they will (usually) want to communicate. This means that they will either make more of an effort to speak verbally or they may even not realise that they have begun to do so, such will be their desire to have their needs met through communication - when they have realised that this is possible.

Picture Exchange Communication is certainly not for everyone. It is hard work to teach and can be frustrating for both teacher and pupils at times. But if it is taught correctly, the benefits can be numerous and the person who is learning the system will be given a whole new lease of life. Communication is part of what makes us human and by giving a non speaker the chance to communicate by other means, they will feel as though endless opportunities have opened up for them.