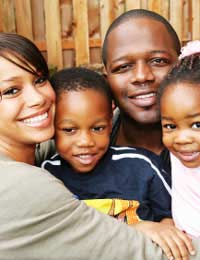 Using sign language from early days or from birth gives deaf children the chance to learn exactly how to communicate in exactly the same way that children who are not deaf learn to communicate through spoken language. In the past, it has been argued that sign language limits children's communicative development - however, this is generally accepted to not be the case any more. In fact, sign language, working as it does, as a language in its own right, can, in the right circumstances, lead to the development of children's speech in more typical languages, even if they do have a hearing impediment.

Growing up in a Deaf Family

Children who grow up being able to use sign language to communicate have been shown to be more accepting of their deafness because they can communicate with others, and internally, they see their deafness as a cultural difference and not a disability. This has the added effect of meaning that if they do encounter prejudice in the future, as they are growing up, they will not think of themselves as disabled, but, as someone who communicates in a different way. If they do not have this ability to communicate, then they may be more inclined to think of themselves as different to others, because they cannot communicate with others in any language.

But, of course, it is not only humans who use forms of sign language - for whatever reason. And other mammals show us the benefits of human children learning their sign language from birth. In 2009, St Andrew's University conducted a study into gorillas use of signs as language and found that not only do the animals use signs, but they inherently understand each other without needing to explain the meanings of the gestures they made. Obviously, this applies to apes and not humans but the inference is that mammals have long been communicating with signs, from birth, and thus, is as effective a way of doing so as speech.

So, all of the evidence points to using sign language from birth as being an overwhelmingly positive thing. All children need to communicate to live a full and active life and if they cannot do this through speech then a method of communicating through signs and gestures is the next best thing. Body language can be extremely expressive and any child will benefit from being able to use it - as is demonstrated by the huge numbers of baby signing classes which spring up around the country these days.