Home > Signing Basics > The Relationship Between Sign Language and Mime 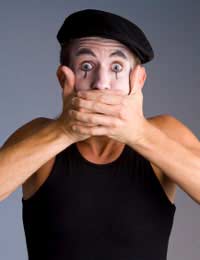 The relationship between sign language and mime is certainly not as simple as suggesting they are both ways of telling people something without speaking. In fact, though the two share a lot of similar traits, they also have a good deal of differences as well. This article will attempt to explore some of each. Both sign language and mime are non-verbal forms of communication which attempt to convey far more than mere words through their various forms of getting their message across.

Mime is generally used as a way of conveying emotion and action on a stage or in a theatre-style setting. It is more of a form of acting rather than solely a way of communicating. Mime actors have to use very exaggerated movements and actions to get the message across. They also use very exaggerated facial expressions to convey emotion – something which happens far less in sign language. But in mime, because the mime artist is attempting to convey their feelings to a large audience, everything has to be more emotional and a bit over-the-top to ensure the message is clear.

This does not happen so much with sign language as this is supposed to be more of a conversation. Therefore, if one person is not sure what the other one means, or how they are feeling, then they can ask. In addition, the structure of the sentence the person using sign language uses can help to convey emotion, as everything about sign language points towards helping people to be able to convey emotion through their signs rather than through voice, as many people using spoken languages would do.

But perhaps the biggest difference between sign language and mime is the way words are conveyed. Where sign language uses a complex and set vocabulary which is spelt out using the hands, mime uses a non-specified way of conveying words, which every mime artist will do differently. And mime artists use their entire body to convey this – so if they wanted to say they were playing tennis, they would act out playing tennis. Someone using sign language, however, would sign the sentence ‘I am playing tennis’, which, depending on the type of sign language, may not even be recognisable to a non speaker as tennis.

Finally, the other main difference between signing and mime is the structure. Sign language is a language just as English, French or Latin are. Mime is an interpretation – different for every performer. While sign language should be understood by anyone who uses it, mime has to be interpreted by an audience member – and two audience members watching the same mime performance can interpret it very differently.

Although the differences between sign language and mime outlined above are big, ultimately, they do share the fact they are non verbal forms of communication. Therefore, anyone who wants to learn how to sign could do worse than try to mime what they are saying to start with. They might not be accurate but it will give them a sense for saying something without verbal speech and teach them how to put things across in a non verbal way.