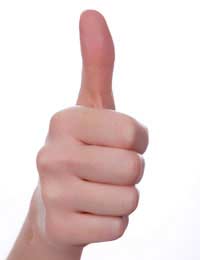 There is a lack of worldwide signing information making it hard for deaf people around the world to communicate, just the same as people who can hear. Because all different countries have their own sign language, international communication is made difficult. In fact, it may even be harder for deaf people to communicate with others from around the world than non-deaf people. This is because even countries which share the same spoken language, the USA and UK being two which spring to mind, do not share the same sign language. And to make matters even harder, they are not related. American Sign Language bears little or no resemblance to spoken English or to British Sign Language. But at conferences and the like, delegates must come up with a system to help everyone regardless of where they are from.

Gestuno was invented as a way to convey worldwide signing information. It was invented by the World Federation for the Deaf some 60 years ago as a response to increased numbers of events where deaf people from across the world were coming together to meet and talk. The main problem was that these people had no way of communicating. So a type of pidgin sign language was put together to allow them to speak to each other. Gestuno, as it is known, is not a real language because it has no grammar system or structure of its own. Instead it uses commonly understood signs from different sign languages around the world. These signs are then fashioned together in a chain to make in understandable to anyone with a basic grasp of the signs.

If Gestuno is not being used then it is usually down to the individual to decide how they want to get by. Most often, thanks to a lack of worldwide signing information, this will be by finger spelling and lip-reading. All people who know sign language will also know finger spelling and many will have lip-reading skills. Of course, in international circles, even someone who can lip-read well may be left out if the person to whom they are listening speaks a different language. So finger spelling is the way forward, with people spelling out their names and other words they need to convey and using gestures for the rest.

The problem of getting across worldwide sign information is likely never to be wholly solved thanks to the massive numbers of different sign languages in existence. But in some places, most notably Europe, an international sign language is starting to take shape in an organic evolving way rather than being forced. It is likely it may never leave infancy but at least languages such as these are easy to understand for others because of the very way they came about. And just as Esperanto, the common spoken language has never really taken off, although spoken by a minority, it is likely that Gestuno and others of its ilk will be the same, and people will just have to content themselves with learning a second language – sign or spoken.